I’ve had the Eroscillator for a while now. I’ve used it a lot. It’s one of few toys that took up permanent residence next to (or on) my bed. Something that I would grab first, every time. A toy that helped me to re-learn how to orgasm. A toy that allowed me to learn how my post-op body worked. What I liked and disliked. What felt good. But despite all that, this was still a review that took me a long time to write. You’d think that I would have a lot to say, and I do. I’m just struggling to put my thoughts to words.

Let me get the obvious out of the way. It looks like an electric toothbrush. If I was half asleep in the morning, I could easily see myself grabbing this. Even the purple color, which seems to be the only

color choice, reminds me of some cheap thing I’d find in a drug store aisle. The toy requires wall power, but I’d like to note that it comes with a fairly long cord. While it is annoying to be tethered to the wall, I never felt like I didn’t have enough room to maneuver. The handle has ridges along it for a better grip and the on off switch is set into the handle and has matching ridges that blend into the body. The switch has 3 intensity levels and has a small amount of resistance to it. A very small amount of resistance. There were quite a few times that I accidentally switched settings while in the middle of masturbating. Always at the worst possible time.  The switch feels very cheap to me. Sometimes it wouldn’t switch to the setting I moved it to. I’d have to switch it back and forth a few times to get it to go where I wanted it. This could be annoying when I’m trying to turn it off and it won’t stop. But it’s a real show stopper when I’m mid-masturbation.

This particular version of the Eroscillator ships with four attachments. The Ultra Soft Finger Tip, the Golden Spoon, the Cup & Ball, and the Grapes & Cockscomb. The Ultra Soft Finger Tip is really easy to define. To me, it looks like a little marshmallow pillow about one inch wide and 3/4″ high. It is very soft and squishy and can easily be pressed flat. It will quickly regain its shape. According to the website, it is made of medical grade silicone. All of the other attachments are made of “medical grade TPR.” The Golden Spoon is unsurprisingly shaped like a spoon. There is an indent on one side that fits well against my clitoris and small bumps on the other side. The Cup & Ball has a smaller but more defined indent on one side and 3 bumps on the other. The 3 bumps are slightly more pronounced than those on the Golden Spoon. The Grapes & Cockscomb has a large fin-shaped ridge on one side and very pronounced balls on the other.

This is where it gets hard. I have a lot of conflicting feelings on how this toy feels. First off, I should point out that the Eroscillator uses oscillations instead of vibrations. I can’t speak to the science behind it’s mechanics. I’d also like to note that while some bloggers have noticed a pronounced difference between the Eroscillator and normal vibration based toys, to me it really wasn’t all that different. If anything, it seemed to lack the punch and thud that can be found in quality vibrators. It didn’t seem to penetrate far below the surface. I always found myself wanting more intensity. Even at it’s maximum setting it was never quite enough. That’s not to say that it didn’t feel good. The oscillations felt very good against my clit and I was able to have plenty of orgasms using the toy. But there were some issues for me which made the toy difficult to use.

The Eroscillator is a very pinpoint toy. I had to focus on making sure that I held it precisely against my clit. For me, this can be really difficult. When I’m jacking off, I usually hold my vibrator (or oscillator in this case) with my left hand and use my right hand for thrusting a dildo. Due to fairly severe nerve issues, holding something steady against a small target, like my clit, can be extremely difficult. My hand shakes and bounces around and if forced into a position for any amount of time can become extremely painful for me. To counteract this, I usually lock my thighs around whatever I’m using and it helps hold it in place, taking some of the strain off my arm. But the Eroscillators oscillations seem to get lost when i do this. I can feel its movement, but they feel severely diminished. So I end up having to keep my legs spread and struggle to hold it in position. This becomes almost impossible as I approach orgasm, leading to some serious let downs. Nothing kills an orgasm like having the toy slip right as I am about to come. I can’t tell you how many times this has happened. Very frustrating. 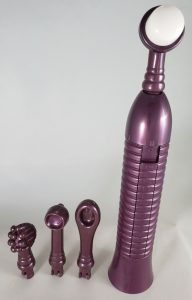 But beyond its difficulties, how does it feel? Really good when I’m able to get it in place. Each of the attachments feels different to me, but each also has different difficulties in using it (for me). Let me start with the Grapes & Cockscomb, because this one is simple. I did not and could not find a use for this attachment. Placing the flat edge against my clit felt nice, but not enough to get me off (or anywhere close). I rarely used it. The Cup & Ball felt the most intense and enjoyable for me. When placed over my clit, it covered it perfectly and felt amazing.  But this was the hardest to hold in place for me. Even when using both hands to keep it steady, I continually would slip and have to stop and reposition. Trying to use a dildo while holding this against my clit was flat out impossible. The Golden Spoon was not quite as intense, however it was easier to hold it in position. I still slip around with this attachment, but it’s more manageable and with a little pressure, I can keep it mostly stable. The Ultra Soft Finger Tip feels the least intense to me. Conversely, it is the easiest one for me to position. With it’s larger size, even if I fell a little out of position, some portion of it would still be in contact. The Ultra Soft Finger Tip is the attachment I ended up using the most. This was solely because it was the easiest one to manage.

I like to press toys hard against me when I’m jacking off. I always feel like I’m going to break the Eroscillator when I do this. It feels delicate and has some serious flex where the heads attach to the body. I don’t know if this is unique to the one I have or if this is just how they are. As for noise, it does make some. When pressed against flesh it is almost silent, but when I just hold it up in the air, it is significantly louder. Not Magic Wand loud, but still noticeable. I mentioned earlier that the toy wouldn’t always properly switch intensity settings.  These things (along with the entire look of the toy) lend to a cheap feeling. With how much this toy costs, this is really inexcusable.

I really wanted to like this toy. It can feel really good. But for me, it’s just too difficult to use. I wonder if, with a partner, it might be more enjoyable. If say I could focus entirely on holding it against my clit, while my partner used other toys on me, that might be more enjoyable. But if I want serious clitoral stimulation, usually I’m gonna reach for my Doxy or Magic Wand. It packs more punch, penetrates deeper, and above all is easier for me to hold in position. I do understand that not everyone will have the issues I have, but for me, this is just not a toy that I grab all that often. Every time I use it, it’s starts off with “Oh, this feels good” and ends with me being annoyed and frustrated. For the price, I’d certainly recommend other toys.

The Eroscillator 2 Plus was provided to me by SheVibe in exchange for an honest and unbiased review.

The Eroscillator 2 Plus can be purchased here: SheVibe