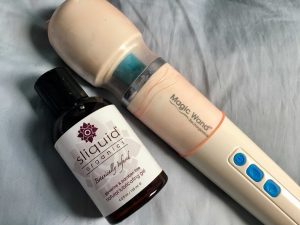 I can’t say that this was a spur of the moment decision. I’d thought for months before attempting this. And I worried, what if something went wrong? It would most likely end with a trip to the hospital. Regardless, late one night I decided that I was going to put my Hitachi inside me and press it directly against my prostate. It’s a largish toy at around 2″ in diameter. So I warmed up as if I’d be inserting a much larger toy. I grabbed a condom and fitted it over the top of the wand and rolled it down past the switch. I bathed it in lube and pushed it in. The plastic of the handle caught against my sphincter muscles and I knew it would be difficult to get out. Still I continued.

I switched it on. Words cannot explain the level of power I felt. The vibrations shook every part of my body, travelling through my butt and clit, on up to my stomach and ribs. But most of all I felt it in my prostate. It was so powerful that it almost became a new sensation, rippling waves of pleasure through me. My orgasm came quickly and shook my entire body. My muscles clenched so hard that I worried I might crack the Hitachi.

Now came the tricky part, removing the toy. I gently pulled at the handle, but found it stuck. I worried that the head might pop off if I pulled too hard. My sphincter muscles had become stuck in the gap between the handle and the vinyl end. The intensity of my orgasm had caused my muscles to tighten massively. This was exactly what I was afraid of. How would I even manage to drive myself to the hospital? Luckily it didn’t come to that. With some patience and focus I was able to relax my muscles and remove the toy.

But it could have been worse. In choosing to use my Hitachi internally, I had made a horrible decision. There are so many things that could (and almost did) go wrong. Sure, I was lucky. It ended with a great orgasm. But it could just have easily ended with a trip to the hospital and a very awkward conversation with the doctor. Yes I want large toys with bone shaking vibrations, but this is not the way to go about it. As much as I’d like to, it’s not worth the risk.

I know that I’m not the only one who has tried this. And on the surface, it seems to have ended fine. But I got lucky. I could have ended up in the hospital. Imagine that conversation. “Yes doctor, I seem to have lost a Hitachi up my butt.” Don’t take that risk. No matter how good it feels, it is not worth the risk. There are safer options. Learn from my poor choices and make less risky decisions. Don’t insert a Hitachi into your body. It might not end as well for you as it did for me.